REACH 2018: Designing research to include and empower the most vulnerable

Designing research to include and empower the most vulnerable

The REACH programme recently held an interdisciplinary workshop at the University of Oxford which brought together experts in bioethics, social science methods, and global health to discuss and share work on the themes of vulnerability and agency in global health research, with a focus on women, children and their families. We were very excited by the rich discussions held and report the key highlights here.

The REACH principal investigator, Maureen Kelley, opened the workshop providing the basis for the day’s discussions and introducing the REACH study; an international collaborative study that embeds ethics research in a diverse range of major ongoing community health studies in Kenya, Thailand and South Africa. The research will feed into both policy and practice in research ethics as well as conceptual thinking in the field.

Sassy Molyneux and Jay Berkley presented on the role of clinical and social science research in addressing the needs of vulnerable children, specifically highlighting the international CHAIN (Childhood Acute Illness and Nutrition Network) study. The in-depth qualitative household narratives collected gave a rich and diverse range of stories which shed light on factors influencing resilience following a child’s admission to hospital. Emergent issues included the direct and indirect costs of hospital admission for the family, as well as anxiety about neglecting household responsibilities; post-discharge support for families and ensuring a strong link-up between hospitals and community health workers was highlighted as a key strategy to increase the capacity to recover. 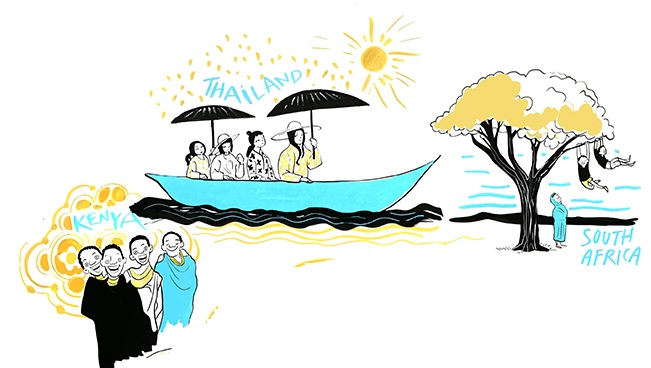 The REACH international researchers then presented early findings from embedded ethics case studies in Kenya, Thailand and South Africa. Scholar Zakayo from KEMRI-Wellcome in Kenya noted the dilemmas faced by researchers themselves in knowing when to intervene in observation-based research such as CHAIN. A system of regular ethics reflection sessions has been implemented to feed back in to study policies and practices. In South Africa REACH is linked to an evaluation study of the DREAMS study (Determined Resilient Empowered AIDs free, Mentored and Safe), a PEPFAR-funded programme aimed to reduce HIV infections among adolescent girls and young women in South Africa, particularly, uMkhanyakude district. Busi Nkosi from the Africa Health Research Institute noted how their early findings show the complexity of navigating vulnerabilities, ethical principles, and research. An emerging theme concerned the exclusion of young boys and men from the programme is self-defeating and that women-focused interventions are good but not sufficient to challenge the gender imbalances that shape structural imbalances which produce and perpetuate female vulnerability to HIV. Nattapat Jatupornpimol from the Mahidol-Oxford Tropical Medicine Research Unit in Thailand shared early findings from REACH in Mae Sot where the study is embedded alongside a clinical trial on treatment of malaria in pregnancy. Emerging issues from early data include responsibilities towards family members with health complaints who are not enrolled in the study, the exclusion of pregnant teenagers – potentially increasing the risk they face, and referral for healthcare services in settings where there is a severe lack of access, causing distress to both researchers and participants.

The afternoon session began with a panel session on how to balance considerations of vulnerability and agency when working with populations historically considered vulnerable during research. We were provided with insights from Bobbie Farsides and Katharine Wright on listening to children’s voices during research guideline development, heard about how  longitudinal child health and education studies can empower young people from Young Lives’ Ginny Morrow, and discussed how ethical guidance needs to be sensitive of pregnant women’s agency and vulnerability in HIV prevention research from Kenneth Ngure. A key cross-cutting message was how research participants can be empowered through research rather than potentially increase community or individual vulnerability, this concept was highlighted by Jenevieve Mannell in the closing talk of the session as she presented her team’s study on the agency of women experiencing gender-based violence in Peru.

Later in the day we reflected on gaps and tensions between international research ethics guidelines and regional and local realities for researchers working with vulnerable populations. Rieke van der Graaf presented the updated Council for International Organizations of Medical Sciences (CIOMS) ethical guidelines noting that guidelines on work with vulnerable populations have been significantly updated. In the resulting panel discussion the importance of including groups traditionally considered vulnerable being involved in research was discussed. Professor Elizabeth Bukusi, KEMRI and University of Washington noted the importance of consenting young women in HIV studies, these women are often illiterate which is a major barrier to consent. This is a crucial group of women to target in order to stop the HIV epidemic in Kenya so practical ethics guidance for work with vulnerable groups is crucial.

In the closing session speakers discussed how research can challenge structural and political injustices and reflected on the use of participatory visual methods and art to engage with research participants and communities. Simukai Chigudu shared a case study on the Cholera outbreak in 2008, noting the structural vulnerability caused by political decisions. Marc Brightman presented an EU Border Care study on behalf of Vanessa Grotti highlighting migrant women’s experiences of maternity upon entry into the EU. The innovative and impactful use of artists to engage with research participants and communities was shared which ultimately produced a comic series and photo-story of a Greek midwife’s experiences. In our final presentation we heard from Gill Black on the use of participatory visual methodologies with community care workers in South Africa. This raised the issue of vulnerability of health workers themselves due to the nature of the role and the low salaries associated with it. Through giving a voice to these care workers they were empowered and their voices were heard by the local community and government.

Moving forwards with REACH we are excited to see our case studies develop further over the next two years and are enriched by innovative approaches such as participatory visual research methods to connect with communities and the broader public. We will come together again formally in 2020 to review the results of the case studies and how they inform guidance on ethical research with women and children. Until then you can follow our work at: www.ethox.ox.ac.uk/reach and on Twitter @REACHOxford.